We are so happy to announce that we will now be offering Coolsculpting at The Office of Dr. Glen Brooks!
Coolsculpting is a non-surgical method of fat reduction that uses cryolipolysis to permanently kill fat cells. Cryolipolysis is the use of controlled cooling to injure and kill subcutaneous fat cells while keeping the overlying skin unharmed. This method of fat reduction requires NO surgery and NO downtime! You can have the procedure performed on your lunch break and you can work out the same day! There are very minimal side effects with the most common being redness, bruising, swelling, tenderness to the touch, cramping, itching, tingling and numbness. Coolsculpting permanently kills 20-25% of the fat cells in the treated area.This is great for that stubborn pocket of fat that just doesn’t go away even with diet and exercise! If 20-25% of the fat in an area isn’t enough, the area can actually be treated again for further fat reduction and an additional 20-25% reduction can be expected.

So, what does this procedure actually entail? Well, I was lucky enough to be able to try it firsthand before we decided to offer it at our office. The most popular places to have this procedure performed are all of those areas in the mid-section with cute little names such as love handles, belly pouch and muffin top.The bra strap roll is another area that gets great results from this procedure. The mid-section is not the only area that can see great results though, the upper arms can be treated as well as the inner thighs. I decided to stick with one of the typical areas and had my love handles treated. Just like any procedure we do at our office the first step is to have pictures taken. After that the area to be treated is marked using a plastic applicator and a washable marker. Next a cold wet gel pad is applied over the area to be treated. This isn’t the most appealing thing, but it is necessary since it helps to protect the skin. The applicator cup with suction is then placed over the area marked to be treated. The skin and fat is sucked up into the cup. Now, I’m not going to lie, this is initially a little uncomfortable, but it is very bearable. I mean, if you take your skin and pull it up, well, it hurts! In the beginning is also feels REALLY cold, but your body gets used to it shortly and for the remainder of the treatment there is only mild discomfort if any! For most areas the applicator is put on with the patient standing up and then the patient is positioned on a bed with lots of blankets and pillows to ensure complete comfort!
Below is a picture of the applicator with the suction on. You can see my skin and fat sucked all the way up into it! 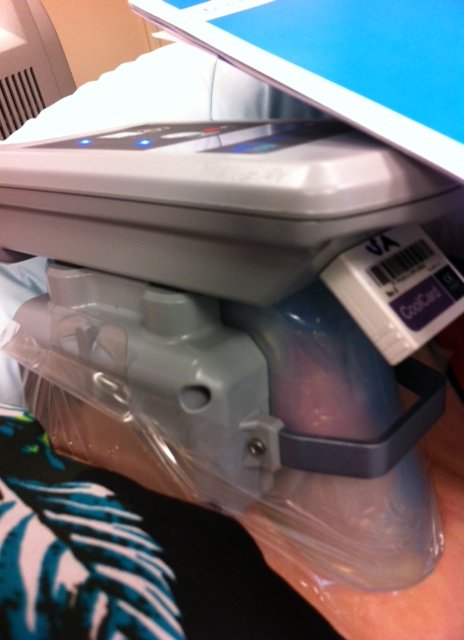 I was able to check my email, spend some time on facebook and pinterest and watch a TV show on my ipad all while getting rid of my fat! One important thing to note is that while yes you can do lots of things to keep yourself occupied during the treatment, you can’t get up or really move around at all for danger of the applicator popping off. If the applicator comes off in the first ten minutes, it can be put right back on without an issue, but if it’s after that it’s considered another treatment and has to be payed for. So, being relatively still is a must. Also, remember to go to the bathroom before you start your hour long treatment so you don’t end up having to pee half way through!
Below is a picture of me all set up watching a show on my ipad during my treatment! 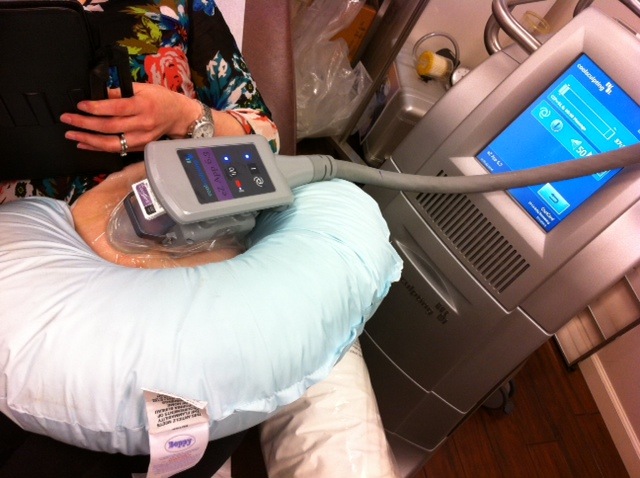 Now, obviously with an area like the love handles, the treatment takes 2 hours since each area needs to be treated for 1 hour. A little before the end of the 1 hour you will feel a slight difference as the machine goes into massage mode. The medical professional adminstering the treatment will be notified by the machine 2 minutes before it ends and will come up to take it off as soon as the treatment ends. There is no pain as the machine comes off. The treated area looks red immediately after the machine is removed and the area that was sucked farthest into the cup is raised and looks like a big red stick of butter. Don’t worry, this goes right down after it is massaged. In my opinion the massage was the worst part of the whole procedure, but others who have been treated say it didn’t bother then at all. It is not that the massage actually hurts, but more that it feels like pins and needles or like running your hands under warm water after being outside in the snow with no gloves. The massage is done by the medical profressional adminstering the treatment and only lasts about 2 minutes.
Below is a picture of what the treated area looks like immediately after the applicator is removed. (Unfortunately I was not able to get a picture of myself, this is of another patient who had the treatment performed to the lower and upper abdomen) 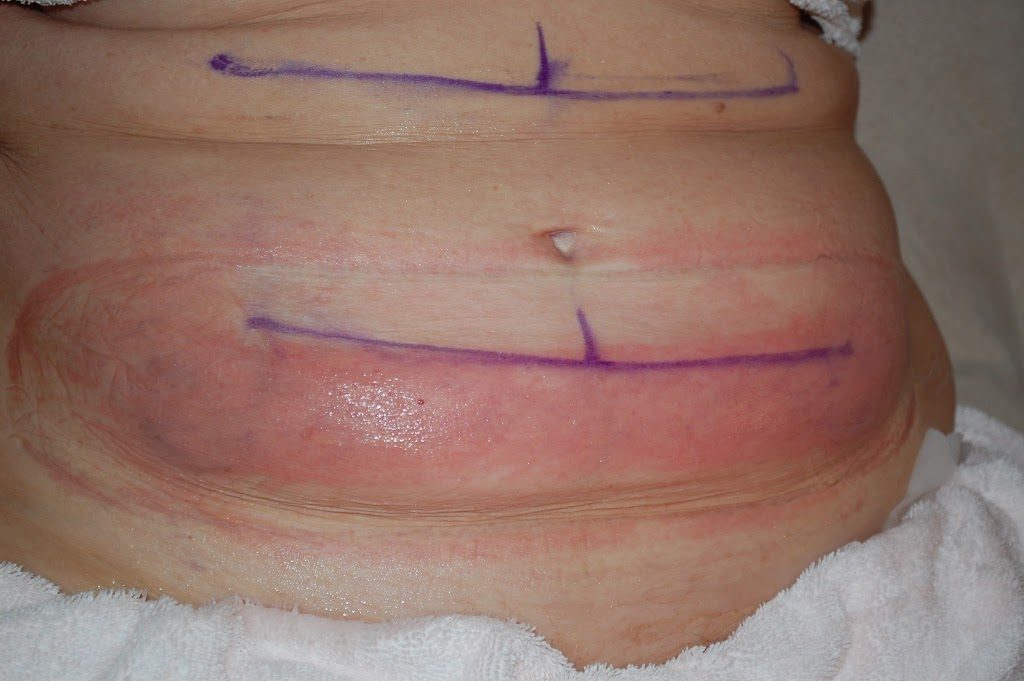 After this, the treatment is DONE and you are free to go about your life with no restrictions whatsoever. I was able to go backpacking the next day and hike 6 miles with no discomfort! Some people who have been treated did report some discomfort after and and some reported it was enough to keep them from being able to work out. This discomfort can be diminished or potentially prevented by wearing compression in the treated areas. The one side effect that I did note was numbness. I had numbness in the treated area for about 3 weeks following the procedure.
So, what about results? Just like most procedures, it takes a little while to see the results. Coolsculpting results usually take between 2-3 months to see, however earlier results have been reported. I personally started to notice a difference in how my pants fit around my sides about a month after the procedure. I continued to see a difference during the 1-2 month period after my treamtent and by probably 9 weeks I saw the final result. One of the best things about Coolsculpting is that it really does work and works on every single patient! No matter what, 20-25% of the fat in the treated area will be destroyed permanently!

To learn more about Coolsculpting and determine if it is the right treatment for you
call the office to make an appointment for a consultation with
Dr. Brooks, Leah Kenney PA-C or Julia Boucher PA-C
413-565-4400
www.drglenbrooks.com

Check out some before and after pictures below to see the results for yourself!
Before on the left, after on the right.